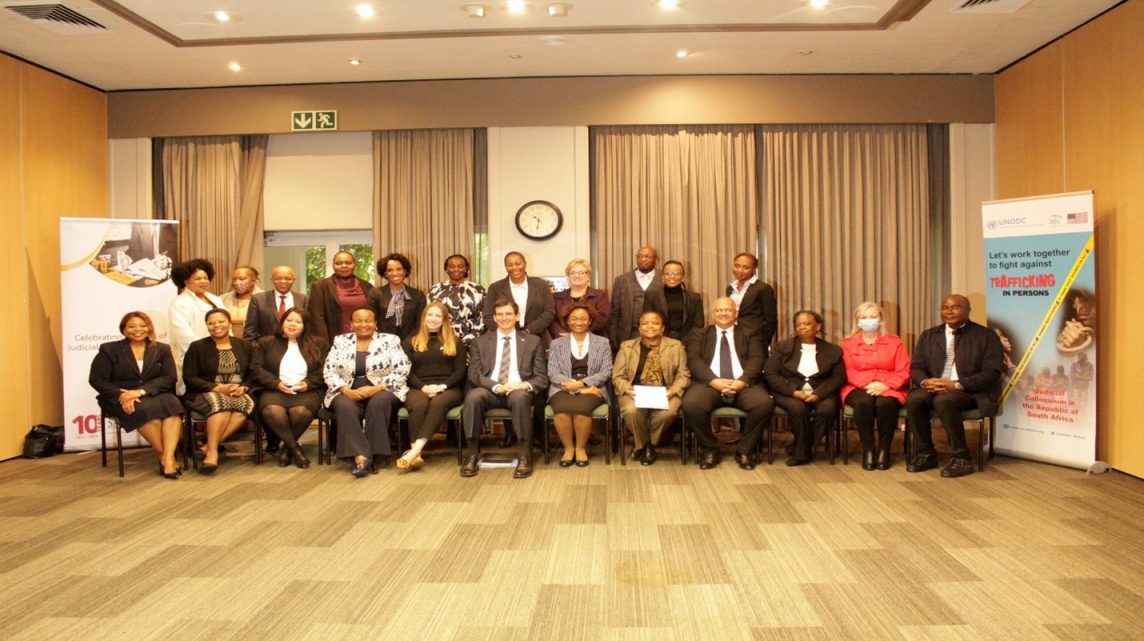 Johannesburg, 11-13 April 2022 – UNODC in collaboration with the South African Judicial Education Institute convened a Judicial Training Against Trafficking in Persons (TiP) in Johannesburg, South Africa from the 11 to 13 April, which is part of UNODC priorities in the Southern Africa Development Community (SADC) Region in enhancing the capacity of Judicial Officers in the response to human trafficking using victim centred approaches under the joint UNODC-SADC Regional Programme (2013 -2023). The Regional Porgramme aims to support SADC member states to respond to the evolving threats and challenges related to crime, drugs and terrorism in all its manifestations.

The objectives of the training were to strengthen capacity of Judicial officers to effectively address trafficking in persons with a special emphasis on vulnerabilities of victims and the trauma they suffer; strengthen Judicial officers’ understanding of vulnerability and its role in presenting challenges to evidence and using tools that explain psychology and culture with special emphasis on child victims to resolve the evidential challenges and to build the capacity of judicial officers on Sentencing principles on anti-trafficking in persons. Lastly, the workshop also acted to launch the Trafficking in Persons Handbook for Judicial Officers in South Africa.

The training workshop was in line with UNODC Strategic Vision for Africa 2030, which aims to provide innovative ways to support Member States and stakeholders over the next 10 years to strengthen crime prevention, enhance the effectiveness of criminal justice systems, counter organized crime and corruption, promote balanced drug control and improve the rule of law.

In the Southern African Development Community (SADC), one unique trend that stands out in the region is that convictions on human trafficking remain low. However, UNODC has over the years convened Regional Judicial Trainings on Combating Trafficking in Persons for Judges and Magistrates to strengthen the adjudication of cases. As such, the convening of anti-human trafficking trainings for judicial officers remains a key intervention in the response to human trafficking.

During the official opening of the workshop, Mr. Vincent Spera, Consul general, US Embassy to Republic of South Africa said that “Human trafficking is such an important issue for us to work on together. It erodes the rule of law, the safety of communities, the security of borders, and the strength of economies and it transcends borders, so we need a global coalition to confront it”.

Meanwhile, Dr. Gomolemo Moshoeu, Chief Executive Officer, South African Judicial Education Institute (SAJEI), said that “Trafficking in Persons is a very complex and serious human rights issue. Some of the common features of TIP are coercion, deception, slavery or forced labour, etc.  TIP is linked to different crimes like corruption, money laundering, terrorism, and others. The focus is on the profit margin. Adjudication of TIP requires constant refining of skills hence we are here today”. She went on to say that “SAJEI is celebrating 10 years in operation. It comes to mind that 10 years ago I was requested to start the Institute with an empty office, desk and telephone. Today, the Institute has African and international footprint which we are proud”