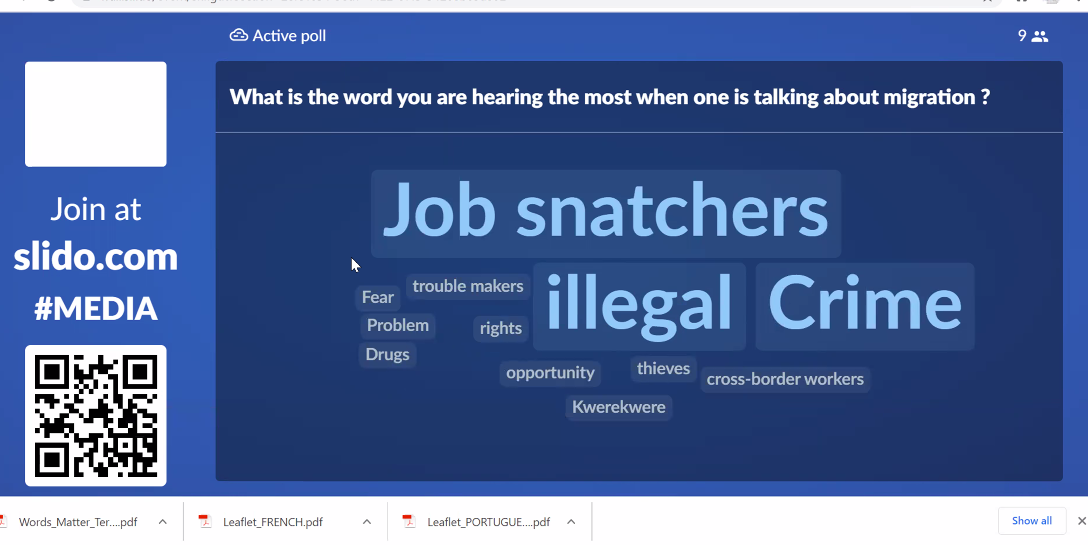 Participants at the virtual Media Training

The SAMM project hosted a media training course “Promoting a positive image of migrants and recognizing their contribution to development in the SADC region from the 20th to 29th October 2021. The main objective of this course was to improve the capacity of media professionals on reporting fairly and effectively on the key migration thematic areas covered by the SAMM project.

Through this course, the SAMM project raised the media awareness concerning the promotion of a positive image of migrants, asylum seekers, refugees, stateless persons, and IDPs and the identification of their contribution to development in the SADC region. A well-informed media can positively influence policymaking to improve the situation of mixed movement population and their families, as well as reap the benefits of migration, asylum seekers and refugees for the countries at large. The e-learning course “Promoting a positive image of migrants and recognizing their contribution to development in the SADC region was a collaborative initiative of the ILO and its Southern Africa Migration Management (SAMM) partners (the International Organization for Migration, the United Nations Office on Drugs and Crime, and the United Nations High Commissioner for Refugees)

Worldwide, migrants are still too often victims of racist, discriminatory and xenophobic attacks. The media often promotes a toxic public narrative on migration, and reinforces stigmatisation through the inclusion of xenophobic and discriminatory messages. Indeed, the press often portrays migrants as criminals, illegals and as “stealing jobs from national workers”. Furthermore, migrants are frequently scapegoats during economic recessions. It is essential to change negative perceptions and attitudes through evidence or fact-based journalism and broadcasting that contribute to eliminate public misconceptions. Indeed, a fair and balanced reportage that recognizes migrants’ contribution to the economic growth and development of countries of origin, transit and destination is urgently needed.

35 Journalists, editors, communication officers and media practitioners from different media houses and agencies across the SADC region, attended the training. Robust discussions were held on issues of migration in the region and how to report on the complexities of this topic.

Participants share their perceptions on the common narrative around migrants