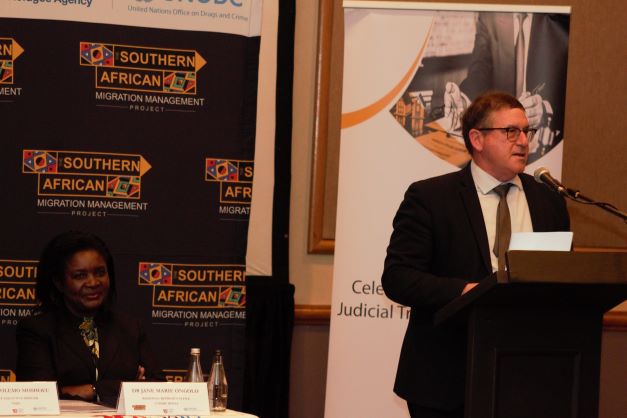 Human Trafficking: Prevalent in Public Discussions but Not in the Courts

Pretoria – South Africa is a preferred country of destination for many types of migrants, including unaccompanied children and smuggled migrants. The crime of trafficking in persons is also an issue of concern, with women and children being major victims.

However, like everywhere in the world, human trafficking is characterized by a very low rate of prosecution. While it has always been hard to detect such cases, the onset of the internet and advances in technology have made it even harder to catch those involved. Traffickers use the cover of the web to recruit their victims, to advertise their services and to move the proceeds of their crimes.

On the bright side, the average conviction rate globally has tripled since 2003 when the United Nations Trafficking in Persons Protocol entered into force. But this is off a very low base. Thus, human trafficking is hardly in decline.

In 2018 about 50,000 victims of human trafficking were detected and reported by 148 countries, according to the United Nations Office on Drugs and Crime (UNODC). Even then, the actual number of victims could be higher.

Suspected cases in South Africa are more likely to be in private conversations and on social media than in the courts. This points to the need for improvements in both law enforcement and prosecution, according to the country’s Deputy Minister of Justice and Correctional Services, John Jeffery, expressing what holds true across the world.

This view is also shared by Vincent Ratshibvuma, a judge based in Mpumalanga, one of South Africa’s nine provinces, which borders Mozambique and Eswatini. “That is why I made a case for the NPA (the National Prosecuting Authority) to be trained in such cases since they are the ones who bring cases to court,” he said.

Mr Jeffery and Judge Ratshibvuma were speaking at a colloquium of judicial officers jointly organized by UNODC and the South African Judicial Education Institute (SAJEI). The gathering was meant to familiarize magistrates with the intricacies of trafficking in persons and migrant smuggling.

Mr Jeffery described trafficking in persons as a crime that does not stop at national borders and “that’s why cooperation is important.”

UNODC Southern Africa Regional Representative Jane Marie Ongolo said the organization is involved in the compilation of a Southern African Regional Case Digest to assist with the prosecution of cases. “We realized that, sadly, the highest percentage of crimes in the region relate to trafficking for sexual exploitation, and mostly involve minors,” she said.

UNODC is also cooperating with the South African Police Service to roll out  trainings that will reach officers throughout the country. The aim is to close the identified gap in evidence gathering and follow-up.

Teresa Horne, a judicial trainer with SAJEI, elaborated on what she sees as the growing use of ordinary residences and hotels as brothels.

According to Dr Ongolo, Africans continue to move across the continent in search of economic opportunities, hence policymakers need to work at making migration safe, regular and a force that can be harnessed for development, both in the countries of origin and destination.

She said contrary to perceptions that many Africans are making their way to Europe, the vast majority of those thinking about migrating have no interest in leaving the continent and have no intention of moving permanently.

“An argument can be made that migration is etched in Africans’ DNA, that Africans have and will always move within and across the continent, and that they are not about to stop,” Dr Ongolo said.

The judicial colloquium was organized under the SAMM project which is funded by the European Union and is a collaboration of four UN agencies: UNODC, ILO, IOM and UNHCR, under the one-UN model. The overall objective is to improve migration management in the Southern Africa and Indian Ocean region. https://www.sammproject.org/