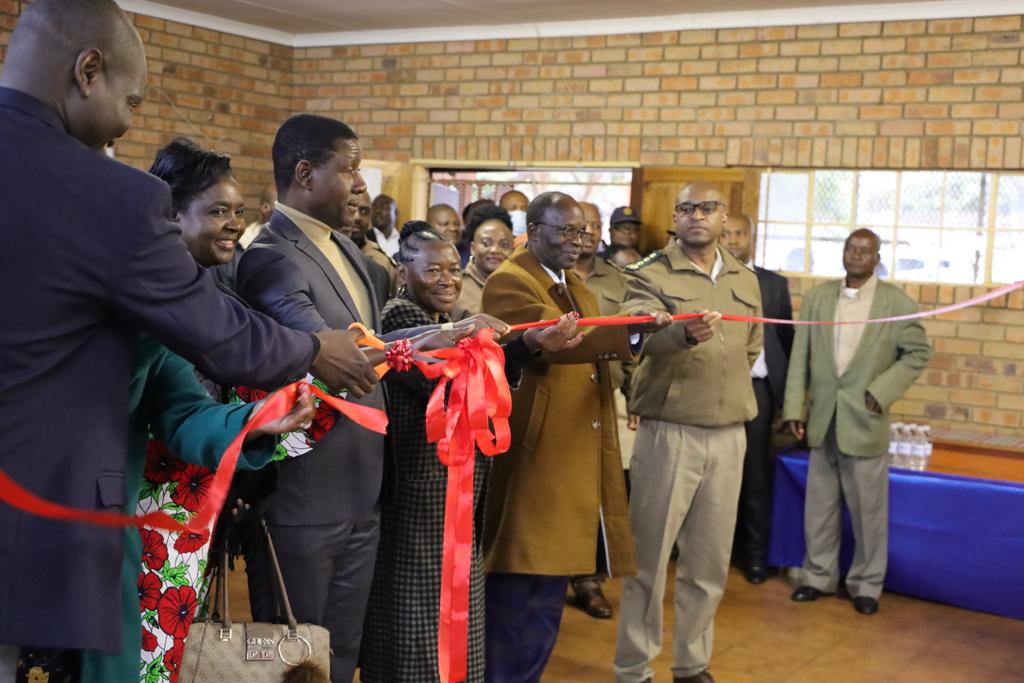 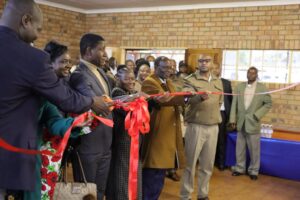 A popular rural school in South Africa’s Limpopo province hosted this year’s main commemoration of World Day Against Trafficking in Persons jointly organized by the Department of Justice and Correctional Services, and the United National Office on Drugs and Crime (UNODC).

Mphaphuli Secondary School, an iconic school in Thohoyandou, was established in the 1920s and has grown exponentially, largely due to the support given by the community. Among its former students is President Cyril Ramaphosa and renowned boxer Phillip N’dou.

In commemoration of World Day Against Trafficking in Persons, the school’s 1,500 learners interacted with dignitaries, including the Minister of Justice and Correctional Services, Mr Ronald Lamola, who commissioned a computer centre with 10 computers and furniture sourced through UNODC.

The event, held under the global theme of the day “use and abuse of technology”, was meant to emphasize that technology has become both an enabler of trafficking and also a possible tool to fight such crimes.

The crime of human trafficking has received a major boost since the onset of the internet. Since then, among traffickers’ most preferred ways of finding victims is posting fake job offers online, promising work opportunities, often in far off lands. Such recruitment and coercion often occur through targeting on social media.

Thus, the computers provided to Mphaphuli Secondary School were meant to support students to achieve computer literacy and also for them to learn how to safely navigate cyber space.

Mr Ronald Lamola said online connectivity was among the manifestation of globalization which presented both opportunities and dangers – including human trafficking. The internet, he emphasized, allowed people to interact easily and in real time, on social media such as WhatsApp.

Mr Lamola also said it was strategic that the commemoration was taking place at Mphaphuli Secondary School, situated not far from the country’s busiest land border crossing at Beitbridge, a factor that increased the risk of trafficking.

UNODC Regional Representative Ms Jane Marie Ongolo implored the learners to always navigate the internet safely, including refraining from accepting friend requests from strangers and not falling for offers that appear too good to be true.

Sarah Rammbuda, the mayor of Thulamela – a municipality in the area – said while learners were at risk of falling risk to trafficking and “as leaders we have a duty to guide them.”

Earlier in the day, both Mr Lamola and Dr Ongolo also spoke on the dangers of human trafficking in an interaction with students at the University of Venda (Univen), located a stone’s throw from Mphaphuli Secondary School. It was as a student at Univen that Mr Lamola served as president of the Student Representative Council and chairperson of the South African Students Congress in Limpopo.

Dr Ongolo said anyone can become a victim. “Traffickers are now using the internet to lure those they want to traffic. This place is not that far from the border, so we need to be careful about human trafficking.”

Turning to drug abuse, among UNODC’s areas of focus, Dr Ongolo urged the university to work at being the site of a proposed e-learning tool that would the community to learn about the dangers of drugs abuse. She said discussions were underway to explore other possible areas of cooperation between UNODC, Univen and departments under the Ministry of Justice.

The commemoration of World Day Against Trafficking at Mphaphuli Secondary School was organized under the SAMM project which is funded by the European Union and is a collaboration between four UN agencies: UNODC, ILO, IOM and UNHCR, under the one-UN model. The overall objective is to improve migration management in the Southern Africa and Indian Ocean region. https://www.sammproject.org/